A Life Led by Passion: An Interview with Mike Abrams 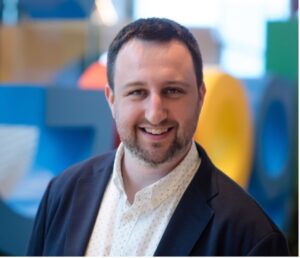 An Enduring Passion:  From the Ice to the Conference Room

What is your role at Google?

I lead a team of strategists who focus on helping multi-channel and consumer branded goods companies with their digital marketing strategies. I have been with Google for nearly five years and love it. Time flies!

How did you end up at Google?

Quite coincidentally. I went to California to visit my best friend growing up who had recently moved out there. I had been to San Francisco for work but had never really toured the broader area. I asked him if we could go to Silicon Valley to see Stanford, Facebook, Twitter, Google, etc. When we got to Google he mentioned a friend of a friend working at Google who was hiring for a similar role to my previous job. He shot a text to the friend who texted another friend. Before I left San Francisco, I was introduced to the head of the team and started the official interview process a week later.

How do you define catalytic behaviors?

I read the book, The Catalyst Effect, in preparation for a panel discussion I was hosting for the Talks at Google program.  I was really excited to know that Shane Battier was going to be on the panel as he is a classic example of someone who demonstrates catalytic behaviors. I also found him very interesting because I grew up playing sports. When I played hockey as a kid it was always apparent who you wanted on your line and out on the ice with you. That wasn’t always the most talented person, but instead the player who knew their role and really meshed playing with the group. In a fluid, fast moving game like ice hockey you need five players on the same page and so it has really been interesting for me to translate my experiences on the ice to what I see in the business world… there’s a lot of crossover.

It makes me think about the people that I want on my work team; specific people I would like working on a certain project because of their versatility. Obviously, you’re always going to need experts in certain areas, but there are also the “go to” people that I highly value. As I’ve worked with my peers, there is a handful of people, that if I need something, or if I want to go have someone to bounce ideas around with, I know that they will add great value. Those folks are often the leaders of your team…and they may not be fully aware of the significant impact they have on everyone around them.

I always think back to when I moved to New York. We were a pretty small group at the time and we were being managed by leaders who worked in a different office. There was one person on my team who always helped everybody. He was so open and willing to answer whatever questions I had. As an external hire I didn’t know our products as well as others on the team who joined from other parts of Google. I felt like every question I asked was dumb or that I was bothering everyone with things I should have already known. But he never made me feel like I was lacking in knowledge or bothering him; he was willing to help and was very encouraging. He was the first to make sure that people felt welcomed. You might assume that he is a very outgoing, highly verbal person, but he’s not. He’s actually very reserved and quiet. But he was often the person who sparked everyone to do great work!

Be a bit more specific: how would we experience him if he walked in the room right now?

He’s very introverted. I feel like I’m a fake extrovert in the sense that I host a podcast and moderate a lot of Talks at Google, but in actuality I’m not. I am naturally more of an introvert and I think that’s probably part of the reason that he and I became such good friends so quickly. He is very reserved but he’ll make an incredibly funny joke that’s witty and timed perfectly. But that might be all that you hear from him in a large group setting. But, if you are in a one-on-one setting then you’re going to have a very robust conversation…very thoughtful, focused, and productive.

You seem to work in such an extroverted role, yet you see yourself as more introverted.

I’m a big believer that the terms introvert and extrovert are often used incorrectly. The way that I’ve interpreted those terms is by answering this question: “where do you get your energy from?” For me, if I’ve had a long day I’m going to my apartment and turning on mindless television. That reenergizes me. Whereas those that I consider to be extroverts like to go out with friends after a long day. Their energy replenishes from being around others. Many “introverts” want to have that quiet time to recharge but then also have the ability to bring everyone together and help find ways for them to connect productively.

I’m curious about your hockey experiences. At what age did you start playing?

I started at age 3. My dad was a team doctor for the minor league hockey team in the city. We went to almost all of the games growing up. Before one of the games, one of the players cut down one of his broken sticks and gave it to me: from there I was eager to play!  Now, three-year-old hockey teams have no goalies, limited positions, and limited rules. You just stick ten kids on the ice and whoever is fastest will score the goal! But I loved it. By the time I was about ten I realized that I was a fairly skilled forward and I made a travel team – it really sparked an enduring passion because I quickly realized how much I loved being on a competitive team. It was such a great experience as I built a deep relationship with my team. It was also a way to keep me out of trouble, develop mental toughness, and think about a competitive mind-set in a way that’s very healthy.

Were you the kind of player that everyone wanted on their line?

I think so; I hope so. I was a very good shooter in high school, but now in the adult leagues I’ve become a much better passer and more complete player. Adult hockey is very different because there’s no contact checking and it requires a bit of a different style to play. I was the type of the player in high school who played strong positional hockey and stayed in the flow of the game (I was only awarded one penalty in my entire high school career). I wasn’t always the fastest or the strongest player on the ice, but I knew where I could position myself to make the team better.

What have you learned the most from moderating Talks at Google panel discussions?

There’s the assumption in the Talks at Google program that we should host whatever opportunity is brought to us as long as it stays within the confines of the discussions…to go with the flow, if you will. Anyone who has worked with me on a Talk at Google panel will notice that I rarely accept the initial idea as our final product. I’m very invested in building off a base idea and making it into something really compelling by expanding it in an engaging way. As you saw with the The Catalyst Effect panel, we used the book as our core topic but built the panel around business and sports leaders which allowed us to have a discussion around a much broader theme.

Is it easier to do the panels virtually? And is the pressure the same as when they are “live” in NYC?

It’s definitely been easier to schedule with guests as they don’t have to travel to an office for a live event. That alone has opened up guests that we wouldn’t have been able to work with in the past. As a moderator, I think it’s a little easier virtually in the sense that I’m not in front of a large in-person audience; instead I just have my notes and the video all on one screen. It’s a little less nerve-wracking virtually compared to being in front of 300+ people. The flip side of that set up is it’s a much more intimate conversation since it’s only the moderator and the guests “in the room” vs the live audience. Besides a small chat, there is no feedback with audience laughs or people nodding their head like you’d have from a live audience. Plus, there is a little bit more pressure since you have to make sure that you come across very professional while virtual. There’s a whole Twitter account devoted to analyzing the bookshelves behind people so I’ve changed my set up a few times to make sure I have the appropriate theme behind me.

Is there anything in particular about your move to New York that has contributed to you being successful?

I made a point of getting out of my comfort zone once I moved to New York. I’m a creature of habit and like routine so I tried to be intentional about changing that in order to have a lot of new experiences. I made myself the “yes man” and said “yes” to things that I knew I wouldn’t necessarily enjoy or would make me uncomfortable. The best example of that was Sleep No More, an interactive theater. It’s a five story warehouse that is centered around the story of Macbeth with characters who interact with you as you move around the rooms. Everybody raved about it but all of the reviews highlighted things that I assumed I would hate. It never sounded like something I wanted to do, but I pushed myself to go with the friend mentioned earlier. Two introverts going to interactive theater feels like the beginning of a sitcom but it ended up being really fascinating. I was out of my comfort zone for sure, but I learned a ton about how to be more spontaneous! It’s not always easy to put yourself in new, uncomfortable situations, but it’s often where we learn the most about ourselves.