I Believe In You: An Interview with Kam Utter

by The Catalyst Effect | Oct 14, 2020 | The Catalytic Corner, Uncategorized 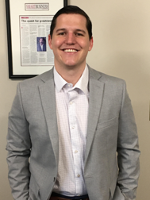 What excites you about your job?

I work at Quest Protection Apparel as our e-commerce sales manager. That’s just a fancy way of saying I get to play around on Amazon all day! I am the lead for two of our major accounts:  Amazon and Walmart.  Two years ago these accounts were not profitable. Going into 2019 we really started to figure out how we could be an effective seller on Amazon. We marketed our Quest Protective Apparel brand and featured our advantages our products have over our competition. Going into 2020 we had sales stretch goal of 10x that of our 2018 performance and we are well on our way to meeting them! It has been awesome and quite the ride.

Why is Quest a great place to work? What made you seek them out for an internship and later for a career?

After I graduated, I ended up going to get my masters in clinical psychology and sport and exercise psychology. However, I quickly realized that it wasn’t for me. My grades were fine but I wasn’t loving it like I thought I would. I thought it was the destined career path for me and if I was going to help people in my life, the only way I could do it would be through psychology. However, I quickly learned that you can impact people’s lives just as much through business.

In undergrad, I was Quest’s first intern. I took the internship as a way to get more professional experience outside of the psychology field. I had such a great experience at Quest in college, so when I came back to Indianapolis, I asked the CEO of Quest, Sam Yadav, if they had any openings.  Luckily they had another opening for an intern, which ultimately helped me to get the position I am currently working in.

You “lead from your current chair”:  tell us more about how you do this successfully.

Up until a couple of months ago I was the only full-time employee on the e-commerce team. I had 2-3 interns supporting me at any given time but that was it. Just recently our team has expanded and now consists of three full time team members.

Outside of my day-to-day job managing our e-commerce accounts, I coordinate our company’s internship program. I hire and onboard interns for all departments. I think this is one of the things that I take the most pride in because our interns are individuals I can really support and impact.

Let’s dive deeper into how you select interns. What are the “must-have” qualities and characteristics ?

We look for three virtues: hungry, humble and smart. They are derived from a book by Patrick Lencioni, The Ideal Team Player. “Smart” isn’t so much about intelligence, it’s more of an emotional IQ and social awareness. And, nobody is necessarily going to be strong at all three… everyone has room to grow. But we look for a person who is committed to these virtues. It’s my job once they become an intern to inspire them and help them grow in all three.

One thing that is required of our interns is to read The Ideal Team Player and put together a PowerPoint presentation for me, their manager, and our CEO. That has really helped our interns develop their ability to communicate clearly, and gain confidence in their presentation skills.

If you were interviewing me, what questions would I likely be asked?

For humility I typically ask about a time when they were on a team and something went wrong: how did that make them feel and how did they respond?  From their answers, we can get a sense of how they function on a team. Are they a bulldozer who runs over people? Do they hold back and wait for others? Do they take full credit for an accomplishment or do they acknowledge others’ efforts? It’s the “we versus me” language that I really look for.

Another question I like to ask is if they’ve ever been given a task that they had no idea how to get started on. They may have had no direct experience with the technology or the area of focus. It’s very insightful to understand their thinking process as they handle situations like that as it ties directly to many of the challenges we face at Quest.

What were some of the trigger points in your life that sparked your catalytic behavior?

Even though I am 27 now, I still remember something clear as day from when I was eight years old. Greg Upshaw was my coach and I was playing little league football for the Steelers. At practice one day he pulled me aside and told me that he wanted me to be our defensive captain and to call out the plays. He said “you’re my leader.”

What I also heard was, “I believe in you.”

That was a big moment for me because it was the first time that somebody mentioned that people look up to me and watch what I do. Up to that point in my life I had just been doing what I was taught, which was to work hard at everything you do and give it your all.

Do you think your capability to influence others was always there…baked in from your very early years…or learned over time?

My dad always told me that I lead without even knowing it. The Steelers story might be a great example of that. Up until that point I may have been leading without knowing it. When I was young I never saw it that way, I just worked as hard as I could.  However, I started noticing my ability to lead as years went on.

When did you become intentional about impacting others…leading others?

You’re a leader because you say the right things at the right time. You know when to step back, and when to step up. I developed a level of respect in college where people would listen when I talked. No matter what the setting, whether sports, music or student government, I enjoyed being part of a team that could perform well and in which I could be a catalyst.

What enables you to influence others so effectively?

Relatability and communication. I think that I can relate to nearly anyone on some kind of level. I can find something that we have in common and we can talk about it:  I’m fearless about striking up conversations with nearly anyone.  Also, I strive to be genuine and invested in what the other person is saying… and in making them feel important… because they are.

What is the hardest thing you have had to face?

In 2014, I was in my apartment when there was a major explosion due to a gas leak. I was in the hospital for several weeks with 30% of my body covered in second and third degree burns. This experience taught me persistent determination: working through things and having the grit to get through the hard times.

I wasn’t expected to be able to play football that fall. But I set my mind to a goal of being back and playing; I wanted to be there and be back with my team. The accident was May 14th and it was estimated that I would be in the hospital for 30+ days…I got out in 17. The doctor said “you can thank yourself for your determination and your persistence with rehab; you can be grateful that you are young and healthy, and, if you have a God you can thank him too because you shouldn’t have made it out of that accident alive.”

Long story short, I didn’t miss a game that fall. Nothing in my life since then has even come close to that challenge.  It was hardest thing I’ve ever had to endure.

Coach Upshaw’s words form the foundation of my grit: “I believe in you.”